Hindustan Contessa is a popular car among car collectors in India. It is often called a muscle car but, it is actually a sedan with a boxy design. It is based on Vauxhall VX series sedan and is often seen as a vintage car. Due to its boxy and long bonnet design, people often modify it to make it look like American muscle cars. We have seen examples of several modified of Contessa sedans from different parts of the country and here we have one such Contessa sedan from the state Kerala that has been neatly modified inside out to look like a muscle car.

Also read: Hotwheels Hindustan Contessa out on the roads: Getting prepared for more modifications (Video)

The video has been uploaded by Adimalikkaran on their YouTube channel. In this video, the vlogger talks about all the modifications that the owner of this Contessa has done to the car. The main attraction of this sedan is the paint job. It gets a high gloss black paint job which gives the car a very unique look. Starting with the front, the stock grille on this sedan have been replaced with an aftermarket grille. Vlogger mentions that the owner plans to change this grille soon. The stock headlamps have been replaced with aftermarket LED units.

The long bonnet of the Contessa has been retained however, the character lines on them have been redesigned. The edge of the bonnet has been redesigned too. The bumper has been redesigned completely and there is a low lip on the bumper which gives it a sporty look. There is Shelby logo on the front grille and turn indicators are integrated into the headlamp iteself. Coming to the side profile, there are custom made fender flares and the stock wheels have been replaced with aftermarket units. It gets 18 inch BMW-like blacked out alloy wheels at the front and 19 inch at the rear. Both front and rear get low profile tires. 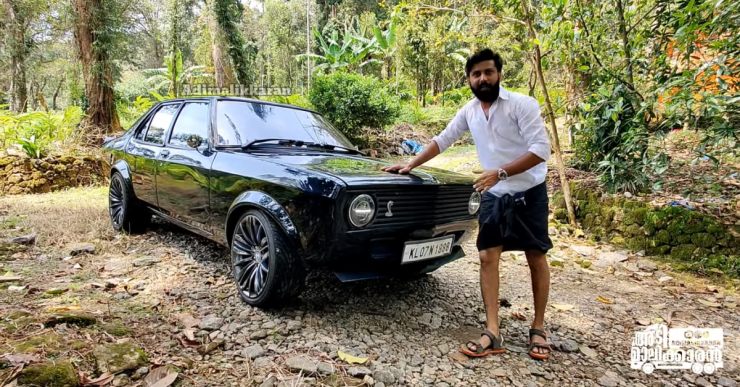 Coming to the side profile, overall design of the car remains the same as stock but, due to the gloss black paint job, the car looks a lot more premium than before. The ORVMs on this car have been borrowed from a Royal Enfield Classic motorcycle and as we move to the rear more modifications on the car are visible. Just like the front, rear profile of the car has been redesigned. The car comes with rectangle shaped tail lamp cluster from factory. This has been replaced with aftermarket tail light units. There is a custom made boot lip spoiler on this sedan too. The lower part of the bumper has been redesigned to get a muscle car like look.

The interior of this sedan has been customized too. Just like the exterior, interior also gets an all-black treatment. There is black leatherette upholstery at the front and rear. The dashboard is from another car and the instrument cluster is from an Ambassador. The steering wheel remains stock and the power window switches are installed on the door. The gear lever is an aftermarket unit and there is an aftermarket touchscreen infotainment system as well. The speaker system has been upgraded too. No performance upgrades have been done to the car and the engine is a stock 2.0 liter unit.

Modiifed Hindustan Contessa sedan wants to be a muscle car