As we have mentioned in many of our articles in the past, driving on Indian roads is quite a challenge in itself. You have be alert always as there is always a chance that some vehicle might come to a complete stop or even a person or animal can jump in front of your vehicles. Such situations have often lead to accidents and we have featured some of these accidents on our website too. Here we are sharing another example in the form of a video that shows why you should always expect the unexpected while driving on Indian roads.

The video seen here was recorded in the dashcam of a car. The incident happened somewhere in Kerala. It can be confirmed by the KSRTC bus in front of the car. The bus is being driven through the right most lane of the 4 lane highway. There is a very wide median that separates the opposite lanes of the highway. From the video, it looks like the bus was being driven at good speed and there was a Maruti Alto 800 and a Maruti Dzire between the bus and the car in which the video was being recorded.

The Maruti Swift Dzire driver overtakes Maruti Alto 800 from the left lane and attempts to move into the right lane where the Alto driver was. When Alto driver saw the Dzire sedan coming towards his lane, he accelerated and did not let the driver move to the right lane. Swift Dzire driver took his foot off the pedal and moved back to the left lane. Another Skoda Fabia driver also comes behind the Alto 800. At this point, both the Alto 800 and the Skoda Fabia are tailgating the transport corporation bus. All of a sudden, the KSRTC – Kerala State Road Transport Corporation bus hits the brake and the Alto 800 driver also applies the brake. 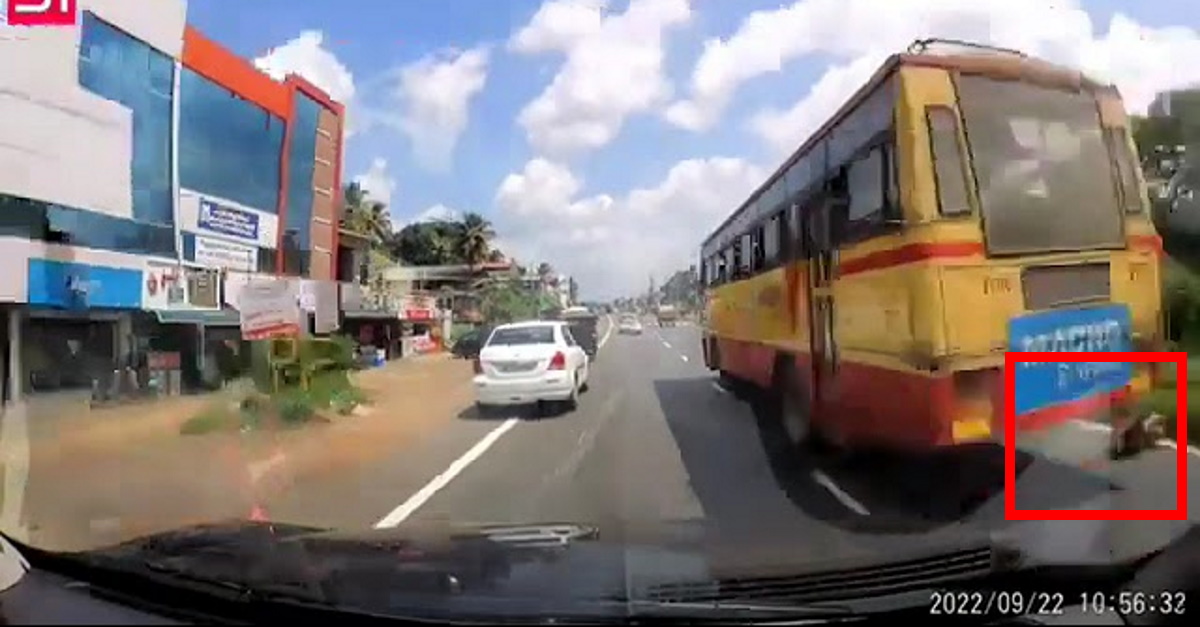 Both of them manage to avoid a collision but, the Skoda Fabia driver could not stop in time. The Skoda Fabia hits the Alto 800 and we see a large dent on the tail gate. It is not clear, if there are any damages on the front-end of the Alto and the Fabia. The Maruti Swift Dzire driver was extremely lucky to have been on the left lane because, if he had overtook the Alto, he would also been in the accident. So, why did the bus driver apply brakes suddenly? As mentioned above, there is a wide median on the highway and we can see people standing on them waiting to cross the road.

One such person who was waiting to cross the road fell off the median to the road. He fell in front of the bus and in order to avoid hitting him, the bus driver applied brakes and swerved the bus to the other lane. We can see the person on the road in this video. If the bus driver had not applied brakes then things would have got worse. There are no underpass or foot overbridges for pedestrians to cross the road and that is one of the reasons why people crossing the roads in such a dangerous manner. The pedestrian was also not using the zebra crossing to come to the other side. This video is another example that shows why one should always expect the unexpected while driving on Indian roads.

Maruti Alto crashes into a bus that stopped suddenly on road