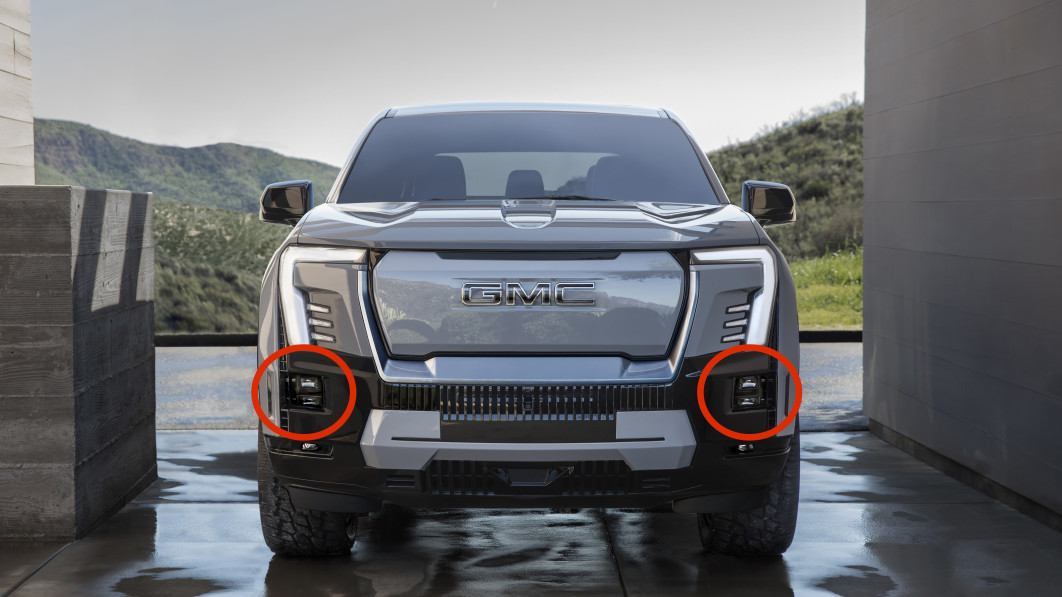 There are a lot of things that are different between the 2024 GMC Sierra EV’s design and the gasoline Sierra pickup, but one we noticed right away was the headlight placement. On GM’s full-size gasoline trucks, the headlights are about as far up the front fascia as they can be. In the Sierra EV, they’re positioned significantly further down and into the lower bumper below the grille.

Why are we highlighting this particular aspect of the design? Well, unless you only ever drive massive, high-riding trucks, you’re probably very accustomed to being frequently blinded by them on the road these days. In describing the Sierra EV’s headlight placement, designers told us they intentionally put the lights further down to improve matters. We pulled Phil Kucera, a GMC design manager, aside to ask him about the change.

“It tends to be a better spot where it’s not glaring in other people’s eyes, right, the lower you get,” Kucera says.

Beyond blinding others, putting the headlights lower on the face of the truck improves headlight performance for the driver, too.

Of course, you’ll notice on the Sierra EV that the daytime running lights (DRLs) are still big and bold in the upper part of the front end. These lights are around for decor, though, and act as pieces of design rather than a functional way to see at night. In other words, they’re lights, but they’re not going to dazzle oncoming traffic or cause glare for the driver like a headlight pointed down the road will.

Moving those lights further down in the front should hopefully be a net positive for other drivers coming across the Sierra EV and for drivers of the truck themselves. How the lights are on plays just as much a role in how other drivers perceive oncoming lights, though, so we’ll have to wait and see the real-world performance on this one.

We’ll also note that moving the actual headlights further down the front end doesn’t take anything away from the design of the Sierra EV. It still features a strong, upright stance that the world is accustomed to seeing from new trucks these days. It’s no surprise, but GM agrees.

“It worked with the design,” Kucera finishes.