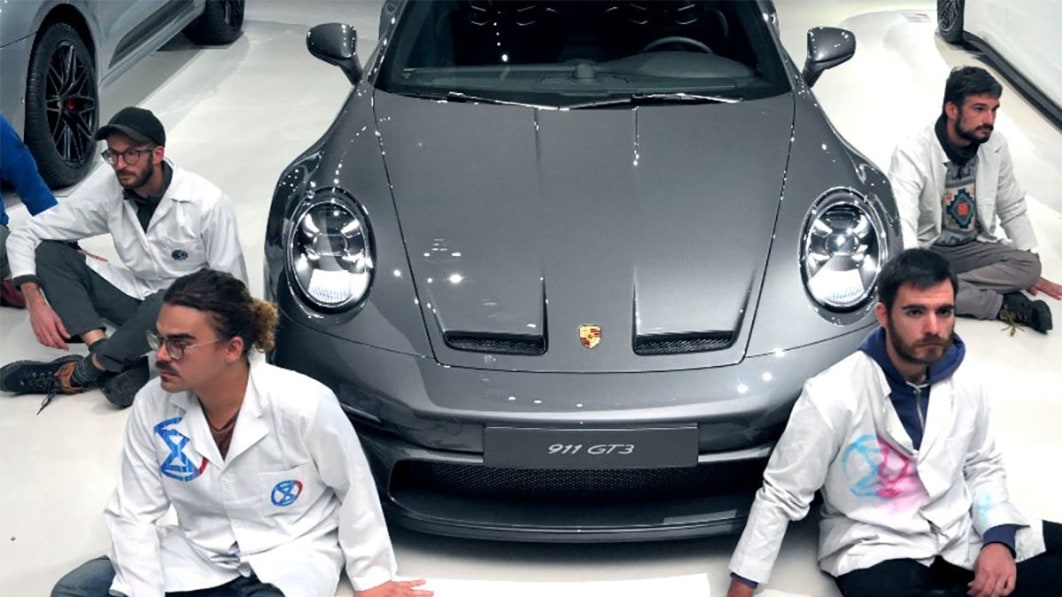 Climate change activists protesting industries and governments had a busy summer in Europe. A relentless outfit called Just Stop Oil in the UK has created disruptions everywhere from major highways to the British Formula 1 Grand Prix, and more recently, they threw tomato soup on a Van Gogh painting at the National Gallery in London. Across the Channel, the Tour de France cycling race was forced to pause during several stages by climate activists who’d glued themselves to the road. Over France’s eastern border, a group called Scientist Rebellion took the sticky route when nine members glued their hands to the floor of the Porsche pavilion at Volkswagen’s Autostadt museum in Wolfsburg on Thursday.

The protesters have several requests for VW Group CEO Oliver Blume as listed in a Twitter thread about the event, among them: support for capping the maximum speed on German highways to 100 kilometers per hour (62 mph); hastening VW’s moves to lower its carbon emissions; canceling the debt and interest payments “owed to VW by the Global South”; and “pressure the [government] to comply with our demands.”

Such protests are happening so often that there’s now a standard back-and-forth. A group disrupts traffic or makes a scene. Authorities are called in almost immediately. The media follow, capturing the ruckus as protesters are unglued or unchained or coaxed down. The Autostadt is a VW gem among the Wolfsburg factory complex, with the immense glass storage tower shuffling completed vehicles awaiting delivery and pavilions for Audi, Seat, Lamborghini, and Porsche. This should have made it the perfect place for the back-and-forth, a magnet for police intervention and media.

Instead, the staff at the VW museum ignored the playbook. Instead of calling Wolfsburg police immediately, staff “recognized the right to protest,” then closed the pavilion for the evening and left — turning off the light and heat as they walked out.

The UK outlet Express, likely sick of this happening on its own shores and not inclined to be charitable, wrote that the protestors “pleaded for medical treatment because their hands were afternoon and moaned that they couldn’t go to the toilet.” The paper interviewed one protester who said of staff, “They refused our request to provide us with a bowl to urinate and defecate in a decent manner while we are glued,” and, “We can’t order our food, we must use the one provided by Volkswagen. Lights off. Random unannounced checks by security guards with bright torches.”

What Express left out is that the reason it could interview a protester was because he’d been removed over a potential medical issue and was being held by police. The remaining eight protesters, along with six Scientist Rebellion members who weren’t glued, stayed in place through the night to Friday morning. The most recent post on the outfit’s Twitter page at the time of writing said police had arrived in the morning to arrest everyone. According to German outlet Welt“The police then took action against the other activists on Friday. Criminal proceedings were initiated for trespassing, coercion and property damage.”

Seems CEO Blume didn’t get a chance to swing by before then. And stay tuned for protesters to start showing up with backpacks of food and toiletries and pails full of kitty litter.